LEGO has a special place in the hearts of many growing kids. I remember when my parents gave me my first LEGO Technic, a yellow fork lift. I still have it and will admit to having played with it, every time my mom would ask me to sort out the box in which she keeps my childhood memories. A few months after I received my yellow fork lift, they gave me a red LEGO tractor, and I tried to come up with my own creative vehicles using the parts available. My friends had their own LEGO sets too and we would ‘collaborate’ and build using what we all had. It was at these play sessions that I had lost one of my critical axle parts, and I still recall how sad I was returning home that day, knowing  my original tractor will never be built the same way again. So when I heard about a young boy who lost his precious LEGO piece, I fully empathized with him.

Seven-year-old Luka Apps spent his Christmas money on the LEGO Ninjago Ultra Sonic Raider set. Against his father’s advice, Luka took his LEGO minifigures on a shopping trip. And he lost one of them, as it fell out of his coat.

Luka, did not admit defeat and decided to write a letter to LEGO, requesting for a replacement.  Below are the actual emails sent and received by Luka.

Email from Luka to LEGO

Email from Richard of LEGO to Luka 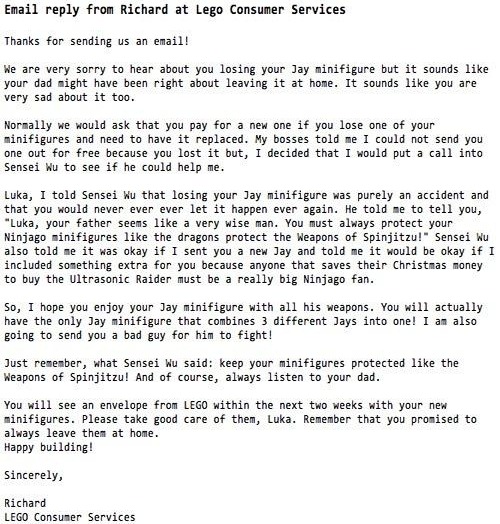 Richard from LEGO consumer services handled the situation going beyond the call of duty. He provided Luka with the missing minifigure, as well as some additional freebies. However, the reward was not without a lesson. Richard went on to advise Luka to  listen to his father next time, and to keep his promise not to take the figures out of the house.

Luka’s story is endearing and heart-warming.  And Richard’s reply is an excellent example of how a SERVICE STAR brand cares for its customers.

We would love to hear about your customer experiences. If you have great (and not so great!) stories you would like to share with SatisFIND, you may email them at mystory@old.satisfind.com